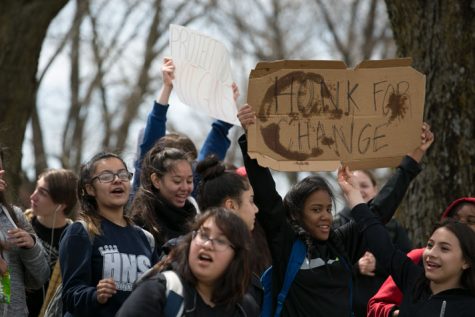 After an ACLU lawsuit against the Shawnee Mission School District over students’ First Amendment rights violations stemming from the April 2018 National School Walkouts, the KSPA executive board began a long journey supporting the ACLU’s efforts and voicing concerns directly to the school district throughout the lawsuit.

The KSPA board believes strongly in supporting its member schools, students and advisers in upholding the freedoms provided in the Kansas Student Publications Act, and the efforts made by the board during this lawsuit are examples of that support.

Members of the KSPA executive board worked together on behalf of students to defend the Kansas Students Publications Act after a personal conflict of interest led KSPA executive director Eric Thomas to receive an exemption from helping in the efforts.

In May 2018, the ACLU filed a lawsuit on behalf of four Shawnee Mission students, and in the process, hired University of Kansas William Allen White School of Journalism lecturer Mark Johnson to write an amicus brief detailing how the students’ freedom of press rights had been violated during the walkout. Under the direction of then KSPA-president Jessica Bowman, the KSPA board and other interested parties worked together to create a set of arguments that Johnson could use in his brief. This brief was used by the ACLU as part of its defense of students’ First Amendment rights.

Fast forward to March 2019, when the district and the ACLU agreed to a settlement in the case which required the school district to apologize to each student plaintiff, pay $1 in damages, commit to training its administrators in students’ First Amendment rights and to adopt policies that clarify students’ rights to express themselves while on campus and to protect student journalists’ rights. After the settlement terms were released, KSPA president Kristy Nyp and secretary Kathy Habiger sent a letter to the school board on June 22, making suggestions for how the board might best train its administrators in upholding the Kansas Student Publications Act. It was signed by the executive board and endorsed by Peter Bobkowski, Ron Johnson, Mark Goodman and John Bowen, all of whom offered their expertise to the school board in training administrators.

On the day after the letter was sent, the school board released a draft of a revised publications policy that it hoped would comply with the ACLU settlement. The policy was to have a first read by the board at that night’s board meeting on June 23. After reading the policy, Kansas City area board members Diana Klote and Kathy Habiger issued a statement on behalf of KSPA during the open forum, speaking out against parts of the policy and asking the board to rework the policy to comply with the Kansas Student Publications Act.

Ironically, all five Shawnee Mission journalism advisers were out of town the night of the meeting, four of them attending the same journalism workshop in Dallas with their students. They reached out to students and parents, encouraging them to contact board members with concerns. Also contacting the board with their concerns were the Student Press Law Center, former district journalism students and other members and supporters of KSPA. The board took no action that evening, preferring to rewrite the policy and present a second reading at the next meeting.

After meeting with the district’s five journalism advisers who all gave input about policy language and context, the board crafted and passed its final draft of the district’s publications policy, which kept in place students’ freedom of the press and pledged to follow the Kansas Students Publications Act. On July 31, administrators participated in civil rights training, which included the First Amendment rights of students.

It should be noted that Jay Senter, editor and publisher of the Shawnee Mission Post, provided valuable coverage of the entire lawsuit over the past two years. It’s local journalists like him who keep the community informed of important local stories like this one.

While the board is proud of its efforts to make KSPA’s voice heard throughout this entire process, we know there is still work to be done in educating administrators and school board members about the Kansas Student Publications Act and students’ First Amendment rights. We will continue to “fight the good fight” on behalf of journalism students and their advisers whenever the need arises.

To support KSPA and its efforts to fight for student press freedom, visit kspaonline.org/donate.