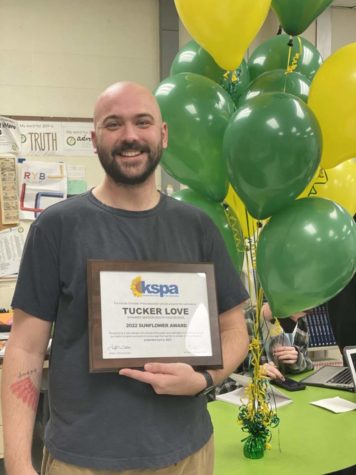 The Sunflower Award recognizes new advisers who show enthusiasm and dedication to building a strong journalism program and aims to encourage those teachers to remain in the profession.

Love advises The Patriot Online news website, plus the yearbook and literary magazine.  Love has also been the Region 5 representative on the KSPA board.

The judge for the award said:

Having reviewed the materials submitted by the nominees for the 2022 Kansas Scholastic Press Association’s Sunflower Award, I am confident that Tucker Love from Shawnee Mission South High School in Overland Park is the most deserving candidate.

Tucker has greatly impressed both colleagues and students alike in his first four years of teaching.

Fellow Shawnee Mission publications adviser Amy Morgan calls him, “an excellent journalism teacher” who has “already made a name for himself.” His student editor-in-chief, Keely Wright, writes that Love — whom she affectionately calls “T” — is “incredibly upbeat,” “bright and inspiring” and her “favorite part of high school.”

Tucker had demonstrated a commitment to journalism education. He is a member and active participant in KSPA and KEA/NSPA as well as a board member of the Journalism Educators of Metropolitan Kansas City. In addition to participating himself, he makes the effort to take his staff to competitions. Further, Wright commended his dedication, noting his willingness and ability to “utilize multiple instructional strategies that appeal to a variety of learning styles.”

Tucker has helped the program take steps toward marked improvement and recognition. During his short tenure, Shawnee Mission South has reportedly added new journalism courses at the school and has seen its enrollment in journalism classes nearly double. Further, according to Morgan, Tucker took the lead in planning the district’s middle school journalism PLC workshop this year and planned and implemented district showcase night for journalism students.

For each of the reasons set forth herein, Tucker Love is a deserving recipient of this year’s KSPA Sunflower Award.

In his application, Tucker writes, “this is what I was meant to do … and do it for a long time.” Let’s hope so.

KSPA executive director Eric Thomas surprised Love in his classroom with the announcement of the award on April 4 along with his students, administrators and fellow teachers.

The KSPA staff and board congratulate Love on earning the 2022 Sunflower Award. 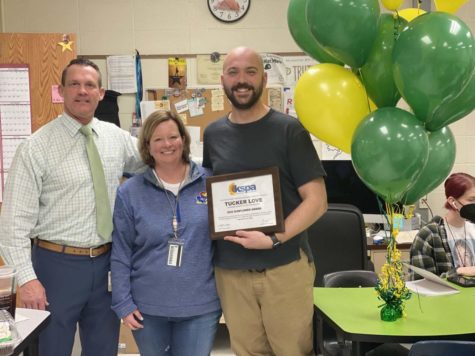 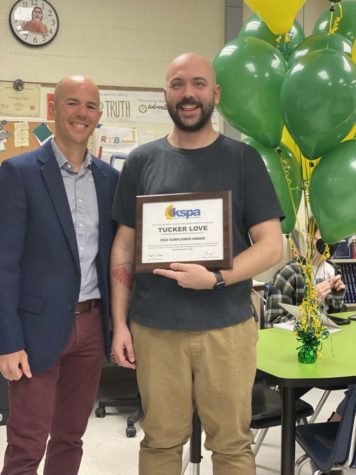 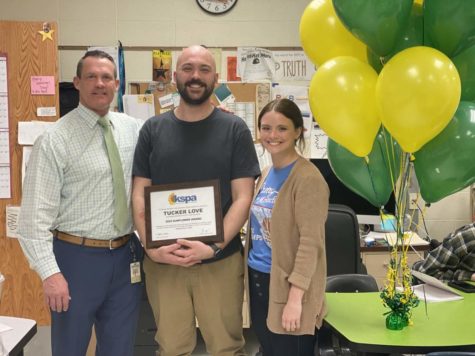 Your ticket for the: Tucker Love wins 2022 Sunflower Award