Julie Calabro is this year’s recipient of the Jackie Engel Award, sponsored by Kansas Collegiate Media (KCM) and named in honor of a former journalism teacher at McPherson High School. Engel helped bring national recognition to Kansas high school journalism and was the first recipient of the award in 1990. She died in 2005, but her legacy of excellence lives on in this award.

The award was created to honor the best high school journalism teacher in Kansas. Calabro received a plaque and cash award.

In her acceptance speech, at the annual KCM Awards Conference in Wichita on Friday, April 8, she made a point to thank the students who have been involved in her programs.

She will also be honored at the Kansas Scholastic Press Association state conference May 7 in Lawrence.

The judge for the Engel award was impressed with the influence Calabro has had on scholastic journalism in Andover for 30 years, first at Andover High School and, since 2001, at Central.

The judge wrote that Calabro advises multiple publications and, with the rise of social media, has encouraged her students to embrace those media outlets as well. 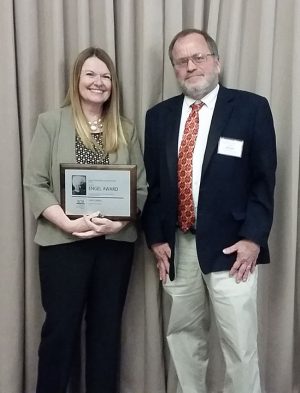 She continued: “Julie’s relationship with her students is lasting, as seen in the multitude of testimonials written on her behalf. She teaches them about the First Amendment, about law and ethics, and about news values. They call her a friend, friend and therapist, and I think every adviser can appreciate that compliment. She has also provided knowledge, wisdom and encouragement to other media advisers who are new to their jobs.

“One could tell immediately about the flavor of the school and its community by looking through the pages of the Spotlight. For example, it tackled the state’s budgetary issues as well as the dance team’s trip to New Orleans. It’s all there.”

Your ticket for the: Julie Calabro of Andover Central wins Jackie Engel Award