The Indian Call yearbook and The Guidon newspaper adviser at Hays High School has won a top journalism teaching award for 2017.

Bill Gasper is this year’s recipient of the Jackie Engel Award, sponsored by Kansas Collegiate Media (KCM) and named in honor of a former journalism teacher at McPherson High School. Engel helped bring national recognition to Kansas high school journalism and was the first recipient of the award in 1990. She died in 2005, but her legacy of excellence lives on in this award.

The award was created to honor the best high school journalism teacher in Kansas. Gasper received a plaque and a cash award at the KCM Awards Conference in Wichita April 10. He will also be honored at the Kansas Scholastic Press Association state conference May 6 in Lawrence.

Gasper has advised the student newspaper and magazine for the last 13 years, after helping to revive the program. One highlight was when the school newspaper won the highest award for high school newspapers, the NSPA Pacemaker, in 2009. There have been many other awards. 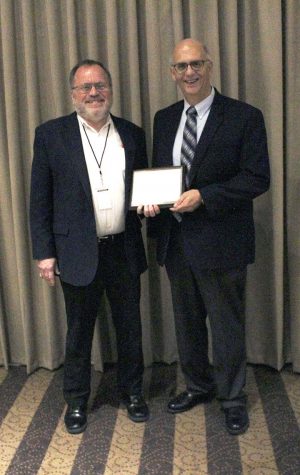 The longtime adviser took a long route to his current career. After graduating from Fort Hays State in 1982, he was editor of The Leoti Standard, and was then owner/publisher of The Ellis Review for over a decade. He was also owner/publisher of The Hoxie Sentinel from 1995-2004. In addition, Gasper was manager of organizational communications for K N Energy, Inc. from 1989-95 in Hastings, Neb. and Denver.

He was chosen by the Jackie Engel Award judge, in part, for the work that came out of his earlier career.

“His students all say he his standards are the same he had as a longtime community journalist,” the judge wrote. “He holds them accountable and he insists on professionalism and responsibility. He teaches them ethics….and is a professional role model in every sense of the word. And they love him for it.”

In his acceptance speech, Gasper referenced a student who helped to get the program rolling once again at Hays, during his first teaching days.

“We need advocates like her in today’s [media] climate,” Gasper said.