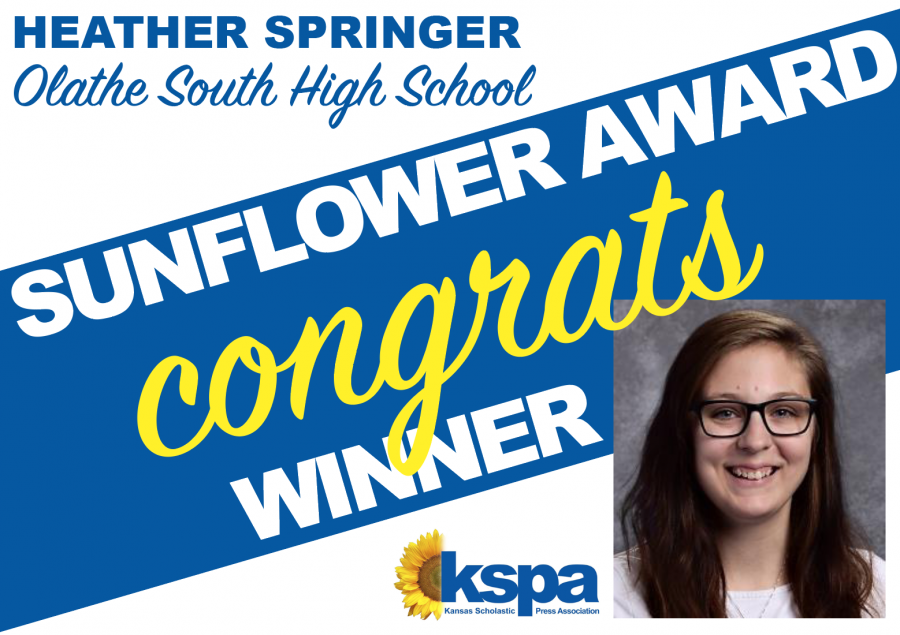 Heather Springer has been named the 2020 winner of the Sunflower Award, which recognizes a new adviser who shows enthusiasm and dedication to building a strong journalism program.

Springer previously advised yearbook at Griggsville-Perry High School in Grigsville, Illinois, where she started a student news publication from scratch and worked to improve the photography and yearbook and photography programs. Springer also advised at Washington High School in Kansas City, Kansas for one year.

Students and colleagues spoke highly of Springer’s ability to connect with students and garner interest for student journalism in their letters of recommendations.

I enthusiastically support Heather Springer for the Sunflower Award. Though I have only worked with her for two years, in that time, she has convinced me that she is a skilled proponent of student journalism and student success in the field. As newspaper and photojournalism adviser, she excelled in many areas. She brought a level of commitment and excitement to the journalism program at Olathe South High School that I haven’t seen for years, doubling the newspaper enrollment in two years. In the photojournalism program, she has tripled the number of applicants.

Mrs. Springer has a special knack for connecting with the students and presenting educational material; students often linger after her class to share writing with her they have done or ask her questions on how to improve. Recently, one of her students ran in to the publications lab with a breaking news story, excited to post it on the online newspaper website. Another student consistently arrives early and stays late to work on his photography. This kind of enthusiasm doesn’t happen by accident.

I could write pages upon pages about Heather Springer but the one thing that you should know is how many lives she has changed in her career. I came into her class enthusiastic my sophomore year. Some things happened during my Junior year of the school including a diagnosis of clinical depression. Because of a lack of effort, my grades tanked. I was kicked off the cheerleading squad and deemed ineligible for the next year. I went into a very dark place and didn’t intend to make it through that school year. She noticed that, one of the only teachers at the school who did.

Mrs. Springer then did something that saved my life. She put a camera in my hand and taught me how to express myself. She gave me an outlet I didn’t know I needed until then. Because of Heather Springer’s pushing, I got offered a job at a local newspaper my senior year. I’ve since gone on to college to pursue a communication degree. I have an internship this summer for a Prospect League baseball team as their photographer.

There are countless stories from all of her previous and current students about how she impacted their lives, and that is why Heather Springer is the best candidate.

Seen through the nomination letters, the hallmark of Heather Springer’s teaching is personal care for her students. While increasing the size of her school’s publication staff, Springer also makes individual students feel valued, understood and seen. Some of the student accounts showed that Springer is more than strictly a teacher of newspaper and photojournalism. She is also an attentive mentor and free expression advocate. The variety of recommendation letters here includes fellow teachers, current students and former students, and each commend her work during her first five years of teaching. Another remarkable achievement noted in the letters is how Springer renovated the publications at two different schools — in two different states! — during this time. Congratulations to Heather Springer of Olathe South!

KSPA congratulates Heather Springer for her continued efforts to connect with her students and improve the publications she leads at Olathe South High School.

Your ticket for the: Heather Springer wins 2020 Sunflower Award