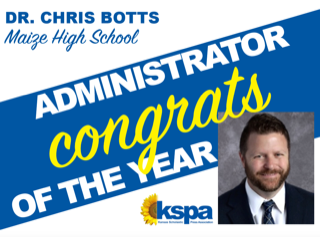 Dr. Chris Botts has been named KSPA’s 2020 Administrator of the Year, which recognizes secondary school administrators who have stood up for the First Amender and his/her students.

Botts is principal at Maize High School in Maize, Kansas.

Students and Maize staff spoke highly of Botts’ support of the journalism program and student publications at Maize High School. In his recommendation letter, Maize adviser Dan Loving recalled a time when Botts complimented him for encouraging his students to report on and look into a teacher’s violation of school policies.

KSPA congratulates Botts on this award and thanks him for this continued efforts to support the work of his students and the First Amendment.

Dr. Botts doesn’t just support the Kansas Student Publications Act and First Amendment at Maize High, he shares their values when teaching classes to aspiring administrators and defends those rights outside our building. He doesn’t just provide adequate and appropriate financial support for student media, he has found ways to increase our budget and always makes sure we have what we need and often what we want. He doesn’t just understand the importance of journalism in secondary curriculum, he advocates for its essential role in a well-rounded education. He doesn’t just encourage academic and professional growth for students and advisers, he inspires us to be better. And he doesn’t just provide personal support and encouragement, he cares about our well-being and success.”

But Dr. Botts doesn’t just check off all the boxes. He’s a friend to the students, someone they can count on. On his calendar is a weekly visit to the newsroom. It’s not to check up on us, rather it’s to check in. He wants my students to know he is there for them, that he is accessible.

In my experience as co-editor-in-chief of Play newsmagazine, I have been hard-pressed to find a bigger supporter of my work than principal Chris Botts. I am sure skimming through a catalogue of our work would make that apparent.

Chris Botts is not a man who is concerned with being correct. He is not a man who seeks to uphold the status quo for the sake of tradition. He does not fight for preservation or speak out of self-interest. In the four years that I have known him, Chris Botts has unequivocally shown time and time again that his best interests lie in doing what is right for the students, not for himself. I would challenge you to find a principal anywhere more deserving to be commended for his contribution to student journalism.

What a collection of enthusiastic recommendations Dr. Chris Botts earned through his time a Maize High School! Often, administrators are considered “supportive” of student publications because they simply get out of the way. But here is a principal who is involved and actively encouraging to his student journalists — on a weekly basis. If this award is here to suggest a “model” for how school administrators can be excellent, Botts’ work as principal serves as a wonderful template. Further evidence of award-winning work was shown here through just how long-standing Botts’ support has been. We congratulate Dr. Chris Botts and hope many administrators follow his lead!

Your ticket for the: Chris Botts named 2020 Administrator of the Year