A panel of judges chose Henschel’s work from among a collection of portfolios submitted by KSPA member schools. The judges are former high school publications advisers, university instructors and professional journalists.

KSPA thanks all of the student journalists from around the state who applied for this award. It takes dozens of hours to construct such a portfolio and gather the necessary materials. Simply applying for this award is a huge accomplishment.

Ben Henschel: Overall Winner and 2020 Student Journalist of the Year

Henschel’s online portfolio showcases a variety of work, but especially in-depth coverage of tough subject matters, including issues within his school district’s special education system, potential student risks of a popular app and inequities within the college admissions process. The judges especially commended Henschel on his coverage of the local effects of the 2014 shootings at the Jewish Community Center of Greater Kansas City and more recently a Walmart in El Paso, Texas. 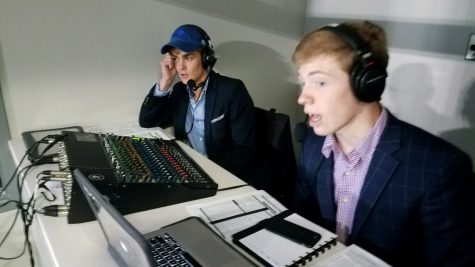 Ben Henschel (right) is broadcast editor of the Harbinger, his high school publication.

The judges reviewed Henschel’s application and provided these compliments:

Henschel’s essay tells the story of how journalism helped him find his way out of a difficult time in which he lost his closest friends to an exacerbated social situation.

“The stories I’ve written became the source of my own — a story that once was trapped in a psychological pinch, but grew to revolve around a renewing sense of purpose and curiosity through storytelling and questioning. “

Henschel writes about how his struggles led him to a new passion.

“That ambition to bring the untold details to life took time to build. When I was accepted as a staff writer, I threw myself in full-bore — broadcasting and anchoring basketball and football, learning website code, taking point on political update stories. I worked beyond a staff writer’s job description, and quickly learned that life’s more fun and more meaningful when I’m busy. Student journalism allowed me to trade that junk food and YouTube for far-reaching work from all walks of high school. “

His adviser Dow Tate praised Henschel for rallying former students, board members and Student Press Law Center officials to speak up in front of his school board against policy changes that would have eroded student press rights under the Kansas Student Publications Act. Tate said it was because of Henschel’s work that the district backed off on the changes.

“In 32 years of teaching future Fulbright scholars, national and state journalists of the year and two future Pulitzer winners, I can tell that there’s a short list of students who have that ‘make things happen’ quality and Ben has it. […] Ben’s combination of a strong work ethic, personality and determination make him someone that the staff of 56 respects and follows. He is someone that stands out among a staff that’s loaded with talent and drive and I give him my highest recommendation. ”

Craig Burnett, a Telly and regional Emmy award-winning director, producer, cameraman, and on-camera and voiceover talent, as well as a mentor for the Harbinger’s broadcasts, added his compliments to Ben’s work.

“As a broadcaster, Ben provides play-by-play and color commentary for most of the games we broadcast. He is amazingly quick on his feet, insightful, and frequently knows the backgrounds of the players we’re covering, and is able to recite relevant stats and really make the game come to life for the viewers. […] People complain today that many journalists take the easy approach, and don’t make the effort to truly make a difference in the lives of the public they serve. Ben seems to take his responsibility to his fellow man very, very seriously.”

The board and staff of KSPA congratulate Henschel on his award-winning application and portfolio. We wish Ben the best luck in the upcoming competition for national student journalist of the year. 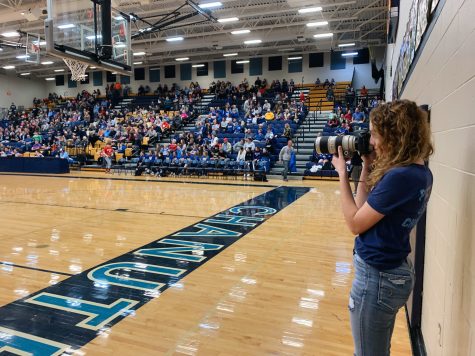 Sophie Osborn takes photos of a basketball game from the sidelines.

Osborn’s work is showcased on a portfolio website that exhibits work for her high school print publication and news website, the Comet. Osborn’s portfolio shows a special emphasis on photography and her work revamping her publication’s social media accounts. In addition to her work for the Comet, Osborn also took sports photos for her local publication, the Chanute Tribune.

The judges reviewed Osborn’s application and noted its quality:

In her essay, Osborn wrote about how she overcame the challenge of balancing the roles of lead photo editor, social media manager and photographer for her publication.

“I would often go to a school day packed with demanding classes, hop on a bus to go to an away game over an hour away to play my basketball game and turn around to take photos of both varsity games. I’d then have to quickly review and edit my photos on the bus ride home, working diligently to meet the tight deadlines for my photos to appear in the next day’s issues, all before I had even started my homework for the night. […] Being able to contribute to something the whole community was able to see has been one of the reasons I have continued to pursue being a journalist.”

Dustin Fox, her adviser at Chanute High School, said though Sophie balanced many roles, she excelled in all:

“Through the past four years I have witnessed Sophie explore the different avenues of journalism, find her niche, and work to become the best photographer our journalism program has ever had. […] Along the way, Sophie has worked to earn the opportunity to have her photos published in numerous publications around the state, won awards at the regional, state and national levels, and been a rock for the Chanute High School journalism publications. Sophie has done all this while being an honor roll student, an athlete, and a student leader. And while all these roles require different talents, the common thread is the grit to persevere and improve.”

The board and staff of KSPA congratulates Sophie Osborn as the 2020 3A/4A Kansas Student Journalist of the Year. 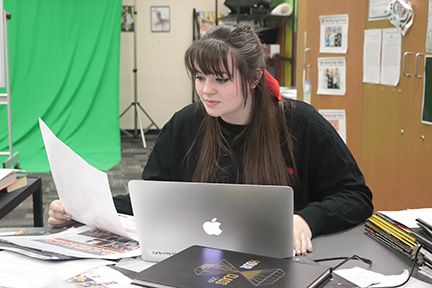 The judges said of Riffel’s portfolio:

In her essay of application, Riffel wrote the following:

“Journalism has given so much to me in life. It has helped me discover a love for graphic design and writing, created relationships and bonds with people I never could have imagined, and showed me that sometimes the best things come unexpected. For that, I will forever be grateful.”

Her adviser, Todd Vogts, wrote in his letter of recommendation:

“Over the course of the years I have seen Abby develop into an exceptional student. Her drive is unmatched. Once she sets her mind on something, there is no stopping her. She is a competitor, which has been instrumental for her work in journalism. […] If there is a story, she is always willing to pursue it, and then she can come back with stellar photos to drop into her exceptional designs. She can truly do it all.”

The board and staff of KSPA congratulate Abby Riffel as the 2020 1A/2A Kansas Student Journalist of the Year.

Please see our list of previous Kansas Student Journalist of the Year winners. And please let us know if you can help make the listing more complete.

Your ticket for the: Henschel of Shawnee Mission East earns Kansas Student Journalist of the Year